Mordiford is a village in Herefordshire, England on the B4224 Hereford to Ross on Wye road 4 miles
east south east of the city of Hereford. The village stands at the confluence of the rivers Wye and 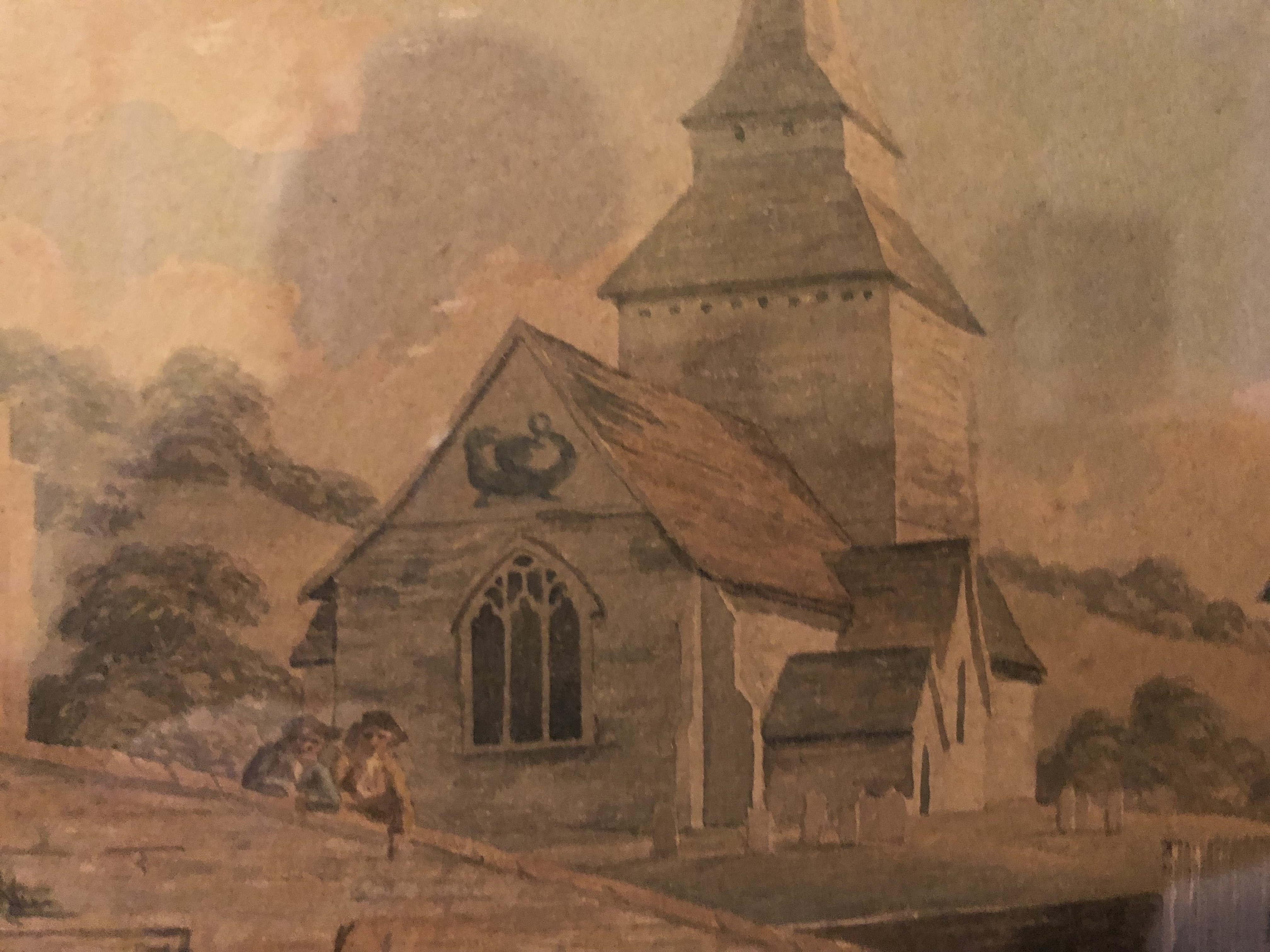 Lugg, and grew up around an ancient ford over the River Lugg. Mordiford is not recorded in the
Domesday Survey, and the name first appears c.1230, perhaps as a derivation from the Welsh mor-dy
a great house, plus ford. The river is now crossed by the oldest surviving bridge in Herefordshire,
dating in part to c. 1352 and completed in the 16th century. The village has a population of 527 and
the community facilities include a pub, primary school and the Parish Church of the Holy Rood, which
dates back to the 12 th century. Following a flood in
1811, the church was drastically restored, and the central tower taken down, and with it a depiction
of a dragon – like creature. It is thought the origins of the beast can be traced to the Abbey of
Gloucester and the Priory of St Guthlac who frequently provided priests for the services of the Parish.
The armorial bearings of the priory in the 14th century were a wyvern which bears a resemblance to a
dragon, and which the monks painted on the walls of the west wall of the church.
The dragon has passed into folklore over the years, and several accounts of the painting and
accompanying legend exist. A Mr Blount 1 in 1670 observed, ‘On the wall of this church a serpent is
pictured with this inscription:

“This is the true effigy of that strange
Prodigious monster which our woods did range.
In Eastwood it by Garstone’s hand was slain,
A truth which old mythologists maintain”

In 1799 2 a visitor to the village remarks, ‘The end of the Church of Mordiford is decorated with a

painting of a large green dragon, an ornament so unusual and seemingly unconnected with the nature
and design of a place of worship naturally excited our curiosity, which after some inquiries was
satisfied. The only painting of the Dragon that exists is by Thomas Hearne 3 in 1809.
The painting on the church has disappeared but the dragon lives on in legend and mythology, no
doubt in varying versions over the centuries. The predominant myth tells the story of Maud who finds
and befriends a baby dragon, which then terrorises the village until it is killed by a local convict who
also dies in the process. Today local references to the Dragon are many: the ‘Dragons Den’ in the
school grounds; a dragon features on the logos for the Mordiford C of E Primary School and the
Dormington and Mordiford Parish Council; The Little Dragons Playgroup, and Serpents Lane, the route
ostensibly used by the beast to travel from its lair in the woods to the village both pay homage to the
historical creature, to name a few. However there is no public representation and outside the village
few have heard of the legend or it’s possible origins.

2
The assets of heritage, culture and folklore have long been combined to create a ‘sense of place’
through the shaping of public spaces. This is what is referred to as ‘place – making’ – a process which
helps people feel a renewed love, passion and pride for their community. What is local and unique
has a special value in a community and deserves to be supported and valued. It was in this context
that a group of Mordiford residents came together with the aim of giving the Dragon – it’s history and
mythology, a more prominent place in our community; our Dragon, our place and our community. An
emerging theme of the discussions was the engagement of the school as one of the key stakeholders,
as demonstrated through their participation and contributions at various stages of the process. In this
way individual children would gain a sense of ‘ownership’ of the outcomes.

In the autumn of 2108, Meadow Arts, a regional contemporary arts organisation funded a Creative
Arts Practitioner under their Meadow Arts Inspire programme designed to teach adults and young
people new skills while exploring creativity and ideas. An additional benefit was the potential this
project might offer as a catalyst/inspiration for the wider village project. During the month of October
2018, Potter/ceramicist Fliss O’Neill worked with Year 3 (7 and 8 year olds) assisted by some year 5
students, around the theme of Dragons in Mythology. Together they crafted a large clay Erasmus
Dragon, based on various European myths including the local Mordiford Dragon. This was proudly
unveiled at a School Assembly in November 2018 and is currently being framed and found a home
Insert photo
A Community meeting was held in late November to further consult and engage with local residents
to give the Dragon a more prominent place in the village and 3 options emerged. A Steering group has
been set up to explore these further

Phase 2
At the Community Meeting in late November, the discussion centred on 3 separate, but not mutually
exclusive ideas; reinstating the Dragon on the church, creating a family friendly Dragon trail, and
installing a permanent Dragon related structure on The Village Green.

1. Reinstating the Dragon on the west side of the church
 requires permission from Diocese, PCC and other church/historic bodies, English Heritage etc which is likely to be time consuming
 has the potential to have wide appeal in the community
 would be highly visible on west side of church particularly if floodlit, thus ‘on show’ aspedestrians and drivers cross the Mordiford Bridge
 Research needed re the design, materials of the original
 fully embodies the essence of ‘place – marking’
 James Hereford has made preliminary contacts with the PCC and Diocese

2. Creating a Dragon Sculpture Trail
 could use existing public footpaths; starting at The Mill and going up through the orchards to Bagpiper Tump, along Serpent’s lane and back down to the Mill as an example
 needs to be user friendly length and accessibility

 Trail could follow different characters of the story as in The Gruffalo Trail with characters/story boards placed at different points. Initial starting point could be the church
 need to look at parking, but as many visitors would come on a w/e, there is ample space along the Dormington road. Other issue is safety – crossing the B4224 over to the Mill to start the trail.
 has potential to further involve the school, through design of sculpted characters/ text for storyboard; possibility of school ‘writing’ and publishing their version of the myth? There are lots of creative ways we could collaborate with the school on this.
 Create a website and interactive trail
 Potential of partnership with Hereford Collage of Art, engaging various departments like sculpture, graphics, artistic blacksmithing to design/execute. Marjorie has a contact at the art college so will informally pursue
 need to check legal situation – by laws etc
 Check out The Magic of Mordiford http://magicofmordiford.co.uk, a musical/art project by Tom Hughes
 may be the most ‘straight forward’ option to execute??

3. Installation on The Green
 originally envisaged as an art installation – a depiction of a Dragon for which we would
commission an artist and secure funding
 however with the emergence of the Dragon Trail and possible reinstating of the
church Dragon, it may be more fitting/appropriate to have a large story board on The
Green which would create the link between the other two projects. It could be a
creative piece of art in its own right, perhaps incorporating the dragon and including
text and graphics relating to the church dragon, the dragon myth, and the dragon trail
etc. Marjorie will contact in the Artistic Blacksmithing Course at the Art College which
is world renowned

Outcomes
 A renewed sense of passion and pride by local residents and school through combining our assets of culture, heritage and folklore.
 Puts Mordiford on the local tourist map and encourages other historic/cultural development eg, the ongoing restoration of the Mordiford Mill, Oral History projects etc
 Promotes cultural and historical awareness in the local and wider community
 Creates a point of interest for vehicles driving though and walkers who regularly use thereby encouraging them to stop and engage
 promotes a sense of well being through encouraging individuals and families to engage in outdoor activities
 Enhances local amenities

Time Frame
As the young people and staff at the school are at the heart of the project, and given that Year 3 were instrumental in creating their Erasmus Dragon, it would seem fitting that we complete the village project by the time they leave school in year 6. We could aim for a village Dragon Weekend sometime in June/July 2022, with official openings and lots of Dragon activities and fun!!

How we protect your data

You live locally? Want to know what’s going on? Subscribe and get updates. — Its FREE